How State Agencies are Automating Habitat, Game and Inventory Programs

Synopsis: Hunting, fishing, and other forms of outdoor recreation are incredibly popular. But how can states effectively manage and regulate these activities, especially when they take place on private land? And how can GIS help us address these problems?

AppGeo is using our expertise in GIS to analyze and improve how we manage and regulate natural resources. This webinar (recorded on April 22, 2021) brings together Aaron Doucett, Sales Engineer and GIS analyst from AppGeo, Eric Ingbar, Senior Consultant for AppGeo, and Jacky Davis, Project Manager at AppGeo for Texas Parks & Wildlife LMA Application, and to discuss the challenges of resource management in the digital age.

Doucett: “For years [the program] was growing and growing and growing, but now we are starting to level off as we get towards 2017, and that is large due to the limitations of the resources that we have. They have only so many people on staff and more and more permits coming in, they don’t have time to approve more. So the program had run up against that natural capacity bottleneck… There’s quite a lot of data that has to be managed and understood for every square mile in the entire state, that’s a pretty big undertaking. Once this program was implemented, we’re continuing to grow again because of that automation that is in place and allowing more work to be done with less time and energy. The interesting takeaways that we’ve seen, the program popularity here in Texas is increasing, while in other states have been seeing a decrease… What’s even more impressive is that they’ve been able to do this while keeping their staff and headcount roughly the same over the last 20 years.”

Deer hunting is incredibly popular in Texas and around the US. To maintain the populations of deer, there must be limits on when, where, and how many deer can be hunted. With so much land and so many permit requests, and so many factors in which requests can be granted, the state government was struggling to keep up with demand. However, with help from AppGeo, Texas was able to automate large parts of their permit program and even make the process fully online. Through the program there is greater buy-in from landowners and hunters by providing additional benefits to participants, such as a longer season or additional deer tags. While Texas is only one example, there are many processes that can be automated and used to improve the efficiency and productivity of state governments and more. 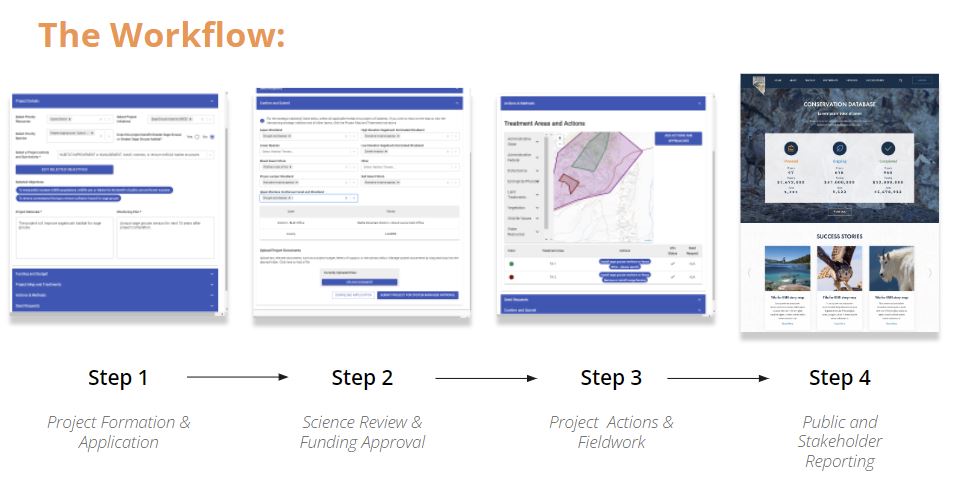 Davis: “This application was built to foster and support sound management and stewardship of the native wildlife and habitats, and deer hunting is a part of that. This application was designed over the course of multiple on-site, off site and online interviews and sessions. When we first started we thought that we had a single set of business rules that are listed here, but as we continued we realized these rules just kept expanding and expanding. Everything got pretty complicated pretty quickly, and now we have about 300 business rules that were previously in the biologist’s head or figured out through various excel sheets. I want you to think about how your organization is run. I’m sure you guys have business rules, reports, user rules, reporting deadlines, and eligibility requirements that are all out there, but how can you make sure everyone is sticking to this every single time and in the same way? Our challenge was to make this pretty complicated process an easy to use interface for the biologists, an easy to sign up process for the private landowners, as well as other user roles such as administrators, law enforcement, and anyone who touches this program.”

In the old workflow, a landowner would mail their property registration, have it visited by state biologists for assessment, and then have deer tags mailed to the landowner. This process is quite slow and inefficient and that problem was magnified by the increasing workload as more land became registered. In the new system designed by AppGeo, landowners register their property online, the application then calculates the number of deer tags that property can support, and then generates them for the landowner to print out themselves. It also gives the landowner autonomy for enrollment in other Texas Parks & Wildlife programs, and for visits by a biologist if needed. This vastly increases efficiency in the process, reducing wait time from weeks to mere minutes.

By automating and compiling the rules, AppGeo was able to make the process streamlined and more engaging for users, increasing satisfaction and buy-in. It also greatly reduces workload for the biologists, allowing them to focus their efforts on the most important and complex problems, rather than attempting to stay on top of an endless stream of permit requests. This sort of shift allows state officials to focus on creating new programs and systems for conservation work, improving ecosystems and conservation across the state.

Ingbar: “Nevada is the driest state in the nation, a little different from Texas. It’s 85% federal land as opposed to 95% private, so think of public lands with islands of private property in the middle of it. Let me give you a little background on the Nevada Department of Wildlife (NDOW)… They conduct over 600 habitat conservation projects annually, and those are funded from multiple sources. Some of the characteristics of those projects vary in size from creating a single water source for wildlife, that might be 1/10th of an acre in size, to reseeding and conservation stabilization of a 100,000 acre wildland fire burn. This could be a one day effort, almost a one person effort, or it could be a multi year project or projects that were planned for a single year that become multi year due to weather… Of course these are almost inherent multiagency in nature given the public land nature of the state itself. As a state agency NDOW is almost always in collaboration with a federal agency. ”

Nevada’s Department of Wildlife (NDOW) has an extremely complex and difficult management task to handle each year. As a result of the vast number of projects, management and data sorting is often moved to the back burner. Especially with more complex projects and increasing demands on public lands, state officials were struggling more than ever to maintain updated and proper records for each project. Spatial data is key to NDOW’s efforts as many of their projects deal with large areas of land.

By creating an application, NDOW could streamline this process and improve record keeping, while maximizing biologist impact. Additionally, making sure there could be consistent records was vital to the multi agency work that NDOW frequently undertakes. With AppGeo’s help, the biologists at NDOW were able to incorporate data input directly into their process, rather than keeping it as a separate, clerical process. With this application, biologists were given more time to be biologists rather than spending their time on clerical duties. 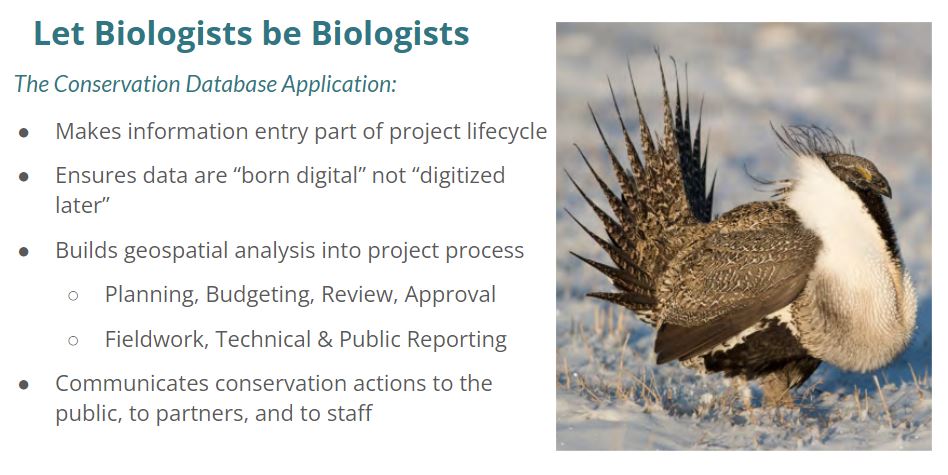