Moving to an Aerial Imagery Content Program: Hear from the Trailblazers!

Synopsis: Imagery content programs are one of the most important and widely used aspects of GIS applications. However, to meet growing demands and make the most of their imagery content programs, many states are switching to a licensed imagery content approach. However, what this switch involves and what benefits it has over traditional “custom collect” imagery content models can be complicated and differs from state to state. Luckily, several states, including Texas and Utah, have taken the leap to licensed agreements and others can learn from their experiences.

AppGeo is using our expertise in GIS to analyze and improve how states handle their imagery content programs. This webinar (recorded on October 15th, 2020) brings together Bill Johnson, Carpe Geo Evangelist at AppGeo, Matt Peters, Director of the Utah Automated Geographic Reference Center, and Richard Wade, GIO for the state of Texas to discuss the benefits and changes that come from moving to a licensed imagery program. 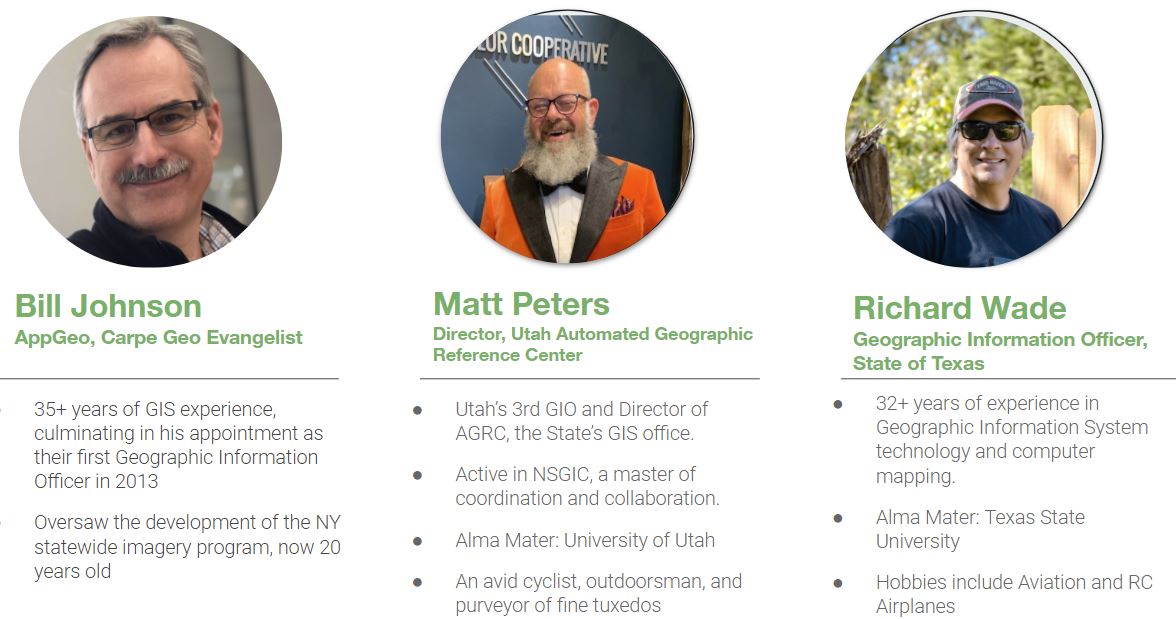 Johnson: “Imagery has been around for over 100 years… In those days the imagery was captured on film. I recall in the early days, we had a vigorous debate with our community about whether it was worth the extra cost to go from black-and-white to color… When we fast forward today, we see imagery has moved from a specialty product for geo-geeks to something that virtually everyone is using. It’s hard to imagine a GIS application without imagery nowadays.”

Imagery is everywhere in our modern world. Many applications, and the people who use them, rely on reliable and updated imagery to function properly. As a result of this importance, web giants like Google have invested heavily into creating their own imagery content programs. The market also features smaller companies that specialize in imagery like Hexagon. Recently, companies have begun to offer their imagery to states. States have begun to accept these offers, starting with Utah and Texas, which have adapted and evolved their programs as a result.

Peters: “We needed to find a solution for imagery that would not send us scrambling each year with uncertainty. Utah already used Google products at a state level, so there was some idea of who Google was… As we started to negotiate and think about this, the price, terms and conditions of use, were a real key issue. A big factor for us, was if everything goes wrong we have hard drives of the imagery, we don’t own it, but we have it. We thought that was a good issuance policy. We also negotiated that all contractors working for the government would be able to access this imagery. So I felt like it was a really good thing in reducing cost to agencies because the imagery would be free. So more time could be spent on analysis and not on data collection.”

Wade: “We had a program that was actually solid, we had the Texas Ortho Imagery Program (?) that was going on for the last twenty years or so. There wasn’t a real need for us to do any of this. But what really excited us at one time was 6-inch imagery. That’s kind of a game changer when what we were looking at just a few years before was one meter…  The way we took it was we’re not gonna replace our program, our program is solid there’s no reason to do it. But maybe if the cost is right, maybe we can take it and we can use Google as a supplement to our own program. Not replace it, but something we can use in case our state agencies couldn’t see what they needed to see on the ground, then they could pop over to Google and take a look at that. That was really how we were looking at this at the very beginning because realistically we didn’t think they would be able to deliver on all the things, on licenses, and how we could use the data to be a replacement. We were surprised.“

Peters: “Even though Hexagon or Google are not [producing] public domain data as such, that doesn’t mean the public doesn’t get some benefit from it. For example, when you look at all the web applications that have  imagery as their backdrop. We just don’t want people downloading it, that’s against the licensing. The main takeaway is that when it comes time for getting this imagery, public domain or not public domain, is very much a situation of talking with people and getting buy-in from a wide range of folks. I think the people can appreciate that the hi-resolution imagery is more special than the innate, so they’re willing to have more flexibility.”

Wade: “We had more of a debate when it came to the public domain side of things, I think that was really really critical. One of the main reasons we didn’t want to forgo our own program was because our own program puts it in the public domain. That was an issue for us and realistically that became our driving factor here. When we started with Google on our first round, that was probably the only thing we didn’t really get out of it. The debate was again about the integrity of the imagery and the quality, and also having a bit more control on the timing, so we knew when new imagery was gonna be flown and when it was gonna be available, that was a big thing. But the one thing that really stuck in our minds, that we really couldn’t ever get past, was the public domain side. With our new agreement with Hexagon we actually have the public domain covered under that. So all of a sudden we have this interesting dynamic we didn’t have before, where it seems like everything our old program was doing we can do in the new program and save a lot of money doing it.”

One of the main objections to licensed imagery content programs is that the imagery itself is not owned by the state. However, it is possible for states to reach agreements to keep data in the public domain. In the case of Texas, a lower resolution imagery was made available for public domain, while a higher resolution was kept for internal state use. Additionally, the benefits of cheaper and higher quality imagery can often benefit the public despite not being public domain. In the case of both Utah and Texas, the public domain benefits were either still accessible or outweighed by the greater benefits that licensing can bring. In both cases, getting public buy-in and broad approval was necessary throughout the process.

Learn more about Hexagon Imagery and Content Plus Here.