Tribute to a Benevolent Founder

Tribute to a Benevolent Founder by Rich Grady, President

Often it is a powerful personality with a big ego and a loud voice that gets the attention.  Not often does the the humble, soft-spoken personality get the recognition that they deserve.  It is to correct this imbalance that I want to recognize the stabilizing, considerate, and thoughtful influence that David Weaver has had on AppGeo from its origins as a company in 1991.  David retired gracefully 3 years ago, and continues to serve with quiet distinction on the company’s Board of Directors, as a valued advisor and sounding board for major company decisions. His belief in AppGeo as a going concern transcended his retirement from direct involvement in day-to-day operations, and his occasional visits to the office are always a welcome and friendly interlude to our busy schedules.  He is a wellspring of encouragement and goodwill.

David Weaver was a great influence on my career.  I first met him in 1976 when I was an intern at the Department of Environmental Management (DEM) in the Executive Office of Environmental Affairs (EOEA) for the Commonwealth of Massachusetts, during the first Michael Dukakis Administration.  Evelyn Murphy was the Secretary of EOEA, and Bette Woody was the Commissioner of DEM. My internship was in the Office of Planning, working on the Statewide Comprehensive Outdoor Recreation Plan (SCORP). My supervisor was Janet Wineman, and David was the Chief Cartographer at the Office of Coastal Zone Management (CZM).  I was studying cartography at UMass Amherst at the time, under the tutelage of Richard Wilkie. When I graduated in 1977, the “old pro” (David) gave me my first professional job, as his assistant. I then followed him to Cities Corporation in Harvard Square, Cambridge, MA. Cities Corp was a start-up company doing R&D in computer cartography, producing maps and atlases for the Boston area.  The R&D effort was funded by Esselte Map Service of Sweden, and I ended-up working directly for the Scandinavian company, getting seriously into the computer graphics technology of the era. David started a freelancing period of his career, producing amazing maps as an independent cartographic entrepreneur, including a map of the New England Coast (pictured below) that is a true collectible, if you can find a copy!

It was always the making of great maps with beautiful cartography, and thinking about the next topic to portray, that made David tick.  More often than not, the topic was related to his lifelong commitment to being a good steward of the environment. He was a pioneer in applying GIS to natural resource management and conservation throughout New England, and beyond.  His maps told the story of both the problems and the solutions, for coastal communities threatened by flooding and sea-level rise, to inland cities facing development build-out pressures, to entire regions dealing with watershed management, to towns too numerous to count mapping their property and infrastructure.

David taught me how to take my school learning and apply it to real-world mapping, both at CZM and at Cities Corp.  His artistry and knowledge of the science of cartography was amazing to me, but especially amazing was (and is) his love for beautiful maps, his generosity as a colleague, and kindness as a person.  And like I said, he was a great influence on my career, which took me to Intergraph Corporation in Alabama as Application Manager for Mapping & GIS, among other things during my high-tech years at Intergraph in the 80s.  Then came the 90s, and David founded AppGeo with two others from state government. I came back home to Boston with my family, and David lured me to join the fledging AppGeo. With the help of many others who will out-perform and out-distance us, we grew it into the great company it is today – a recognized leader in geospatial technology and consulting, nationally.  David and I have been friends for over 40 years, and side-by-side work colleagues for well-over half of those years, both before and during our years spent at AppGeo together. The company is now almost 27 years, and David has created a great legacy as a first generation GIS Professional, and a truly benevolent founder of AppGeo. 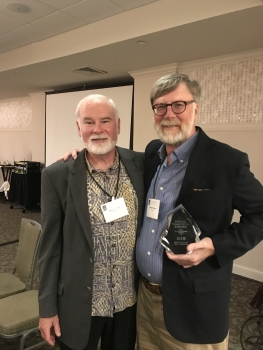 Rich and David together at NEARC 2016 when David received the Peter S. Thacher Award.