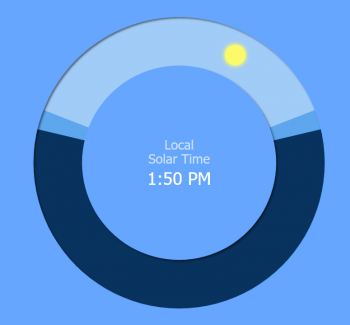 One of my AppGeo colleagues, Peter Girard, recently wrote a mobile sun clock app in his spare time, calling it Camino Del Sol, Spanish for “path of the sun”.  It’s a simple app that uses your location to display basic solar time parameters: sunrise/set, local solar time, daylight hours remaining, length of day/night, all on a minimalist user interface consisting of a sky-blue circle with a yellow sun dot.  Check it out yourself at: https://girapet.github.io/caminodelsol/.  It’s a clever little app and it got me thinking about the ways that time relates to location.  I suppose it also interests me because I have a hobby collecting and restoring antique clocks.

As geographers, we seek to understand the impact of location, and time is intricately entwined in location in ways that can be easy to overlook.  The most basic is that longitude, the east-west axis of our geographic location reference system, is a time function. The earth makes a complete rotation in 24 hours, so for each hour we rotate exactly 15 degrees of longitude, or 1 degree every 4 minutes.  We probably don’t think much about how latitude and longitude were measured prior to GPS, but for many centuries the inability to determine longitude by ships at sea was a major problem.

Latitude, or north-south position on the globe, is easy to measure using a sextant, which is just a fancy sighting protractor with mirrors that allow one to see both the sun and the horizon at the same time.  The user moves one arm of the protractor until the sun appears to touch the horizon when viewed through the eyepiece. The angle of the sun at its highest point in the day yields the latitude measurement, provided you know the date, as well.  If you are in the northern hemisphere on June 21st (summer solstice) and the sun is 90 degrees from the horizon at the midpoint of the day, you’re at the Tropic of Cancer or 23.5 degrees north latitude. Assuming you can read the instrument to within 1/4 of a degree, you can readily measure your latitude with a resolution of 15 minutes, or 15 nautical miles (about 17 statute miles).  For ancient mariners crossing vast ocean distances, this was excellent accuracy. Modern, high quality sextants have a worm gear adjustment to read 1/60th of a degree and a vernier scale that theoretically allows measurement of 1/10th of a minute, or 0.1 nautical miles.

Longitude, however, cannot be measured with a sextant.  The ancient mariners had to estimate their longitude using a method known as “dead reckoning”, which involved estimating the speed of the ship as measured by a “log” tossed overboard and counting the uniformly-spaced knots in an attached rope for a short time interval determined with a small hourglass, and making a best-guess adjustment for the effects of currents and crosswinds on the intended direction (compass heading) of travel.  This was a very crude measurement and on long journeys the accumulated error of dead reckoning could yield an estimated longitude off by hundreds of miles. As the Colonial period in history developed and European nations sent their navies and merchant ships across the globe to North and South America and the spice islands in the Far East, many ships were lost at sea due to the inability to accurately determine longitude. It’s difficult today to appreciate the importance of the ocean voyages of that era as the European and global economies relied on wooden sailing ships to manage colonial empires, execute a vibrant trading economy, and even to send messages.  Ocean voyages were the Internet of that era. Can you imagine navigating across a vast ocean for many weeks or months in a wooden sailing ship and only have the ability to accurately determine your latitude?

The longitude problem produced the greatest scientific quest in that era, driven in part by the Longitude Prize established by the British Parliament in 1714.  The top scientific thinkers of that time, including Sir Isaac Newton, believed that the solution lay in creating an accurate map of the constellations and developing a series of calculations to determine longitude based on celestial sightings.  The great European astronomical observatories, including the famed Greenwich Observatory near London which now marks the 0 degree longitude point, were established to win the race of mapping the heavens and earn the Longitude Prize. The prize, however, was eventually won by John Harrison, working alone in the English countryside, who developed an accurate “sea clock” (now called the chronometer) that would run accurately on a rolling, pitching ship at sea.  By knowing the time at the starting port, as kept on the sea clock, and comparing it with local (solar) time, longitude could at last be easily determined at sea. The greatest location problem of an era was solved with a clock.

There are many other important examples of how time underpins our understanding of location.  Time zones are an interesting study. Unlike Peter Girard’s Camino Del Sol, we have radically adjusted local solar time into standardized time zones in one-hour increments.  In theory it should be simple to determine the time zones at any given location as each zone should cover a 15 degree swath of longitude, and therefore be readily programmable into our applications.  But time zones have been established by political considerations and the actual time zone boundaries rarely align with the theoretical boundaries. Consequently, we need a GIS reference data layer to determine the correct time zone based on a lat/long coordinate.

The growing volume of geoanalytics rely heavily on the time dimension.  How useful would traffic count data be for the study of transportation routes if we didn’t attach time of day to the traffic values, to cite but one example?  A variety of time scales are often employed to expose patterns and generate new insights with time-stamped spatial data.

The greatest global location system yet created by humankind is based on a clock.  The ubiquitous GPS system we all use today to determine location uses very accurate measurements of time, triangulated between satellites orbiting the earth and your position on the ground.  This is possible with atomic clocks accurate to less than 1 microsecond. In fact, the accuracy of the GPS time signal is specified at 97 nanoseconds. Several other sensors well known in the GIS world, including sonar, radar, and lidar, use time to measure distance of a sound, radio, or laser signal sent from the sensor that reflects off of a surface and returns to the sensor.

I’ve also been thinking about time intervals measured in a career span.  It’s in that context that I recognized the pattern of how GIS projects in my career follow the carpe geo model of exploration and experimentation from the origin of a simple request.  This provides an interesting time contrast with the brief moments, parvum momentum, that occurred several times in my career and provided the realization that I was doing worthwhile things.

Einstein figured out that time is not a constant, that gravitational pull warps the time/space continuum.  That idea is hard for me to grasp, but I can embrace the premise that our ability to accurately measure time is the basis for many aspects of determining location.  In that sense, one could fairly say that time makes our careers as geographers possible. Perhaps that is one of the reasons I like old clocks so much.

Postscript:  I recommend Longitude, by Dava Sobel, former Science Editor for The New York Times, which recounts the story of how John Harrison won the Longitude Prize.