On September 6th, 2017, the United States Virgin Islands were hit by Hurricane Irma, a Category 5 hurricane, and 14 days later by Category 4, Hurricane Maria. The hurricanes’ powerful winds tore roofs off houses, toppled trees and shut down the communication and power grids, leaving many residents without a way to contact others off of the islands.

One consequence of the hurricanes’ damage was that GIS experts on the islands also lost the ability to access their servers, GIS data and software licenses. Throughout the recovery period, AppGeo’s USVI MapGeo platform was a critical resource to the community and for disaster relief efforts. MapGeo was the only active, public facing USVI mapping service after the storm took down local servers, data and software (More on MapGeo here). MapGeo’s use of CARTO’s cloud service made basic USVI parcel, address and other base data accessible in an easy to use interactive mapping environment. To further help recovery efforts, AppGeo added the post-hurricane Irma and Maria NOAA imagery to MapGeo to further support analysis and recovery efforts. 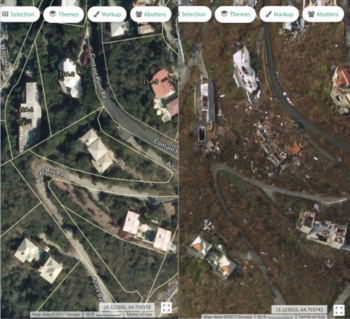 Aerial imagery of the USVI on AppGeo’s MapGeo application showing roof and building damage from Hurricane Irma: before (left) and after (right).

In response to rooftop destruction, FEMA through the US Army Corps of Engineers, launched Operation Blue Roof for the USVI, a program to identify damaged structures and quickly provide roof cover using blue tarps. AppGeo partner, Randy Hale, founder of North River Geographic Systems, who does work for the Virgin Islands, called AppGeo for help with identifying damaged roofs and categorizing the level of roof damage for FEMA using aerial imagery and GIS. The source data for this effort was building point data from OpenStreetMap and post-hurricane NOAA flyover imagery.  AppGeo worked in QGIS (an open source GIS platform) and suggested USVI and recovery staff do the same to provide a consistent work environment for all parties that did not depend on software licenses on the then inaccessible local servers. 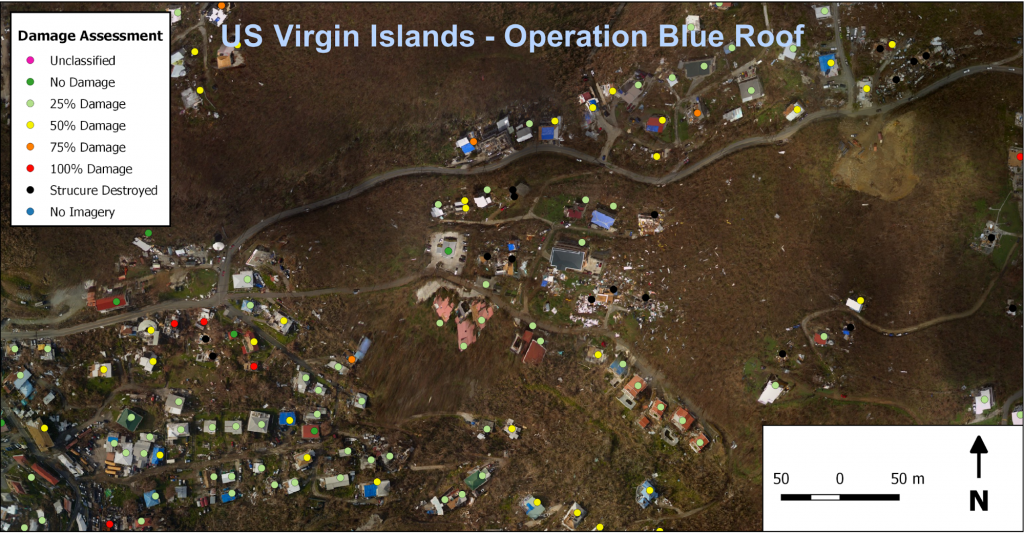 As shown in the image, based on FEMA’s guidelines, the North River Geographics-AppGeo team defined seven codes to assess rooftop damage. The codes represented: no damage, 25% damaged, 50% damaged, 75% damaged, 100% damaged, destroyed, and no imagery available.

With tens of thousands of buildings and three islands to cover, our team made steady progress delivering batches of new data to the USVI and FEMA. Whenever large areas of damaged rooftops had been identified and coded, an update was sent to both the GIS managers and FEMA so they could manage the logistics of sending aid to areas that had the most damage. By January, all rooftops on the Virgin Islands had been coded for damage and the data passed on for use in Operation Blue Roof.