Update: It’s Time for a full-color approach to broadband

The following are some examples of statewide and metropolitan broadband mapping projects that AppGeo has completed:

Objectives of works: The end goal of a broadband mapping initiative is to show usage and access to broadband connectivity. These maps are often used to justify funding to increase broadband access. This data is used also as the basis for Broadband data rolled up by NTIA into the National Broadband Map. From 2009 to 2014, AppGeo participated in the NTIA’s State Broadband Initiative (SBI) for the collection, standardization and submission to NTIA of state broadband coverage information.

Since the end of the SBI program in 2014, much has changed. In the wake of COVID, there is renewed attention to closing the digital divide. The 2021 American Rescue Plan Act (ARPA) is directing billions of dollars to states, money which can be used for broadband development.

AppGeo is staying on top of new funding and changing FCC rules that are redefining minimum broadband standards. Below is a webinar we held titled “What big changes are coming to Broadband Connectivity?”, which highlights some of the developments in our thinking about broadband mapping since 2014. Contact AppGeo for more information on how our current broadband mapping approaches can help you. 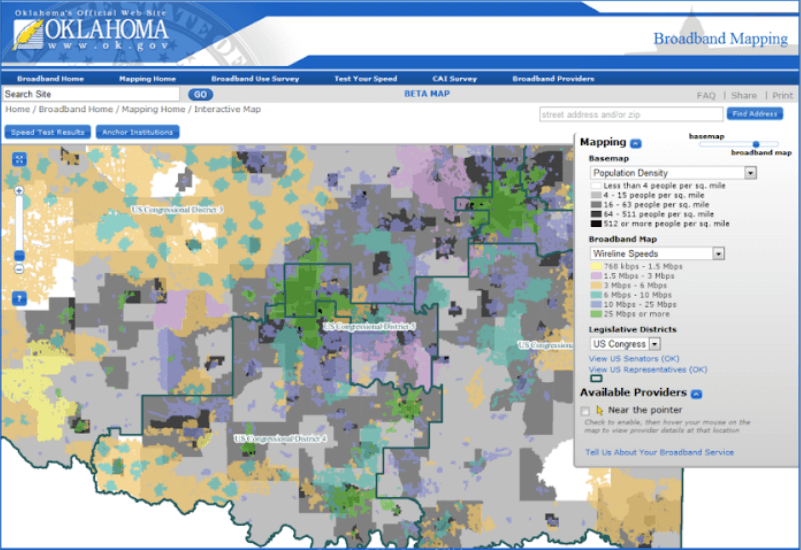 AppGeo helped spearhead the Oklahoma Broadband Mapping Project, which collected the necessary data to identify broadband assets, gaps in broadband services, and opportunities for expansion of broadband services. This data was consolidated onto a map of Oklahoma depicting what areas of the state are served, underserved and unserved by broadband. This enabled Oklahoma’s technology community to integrate information among the government, non-government, and private sectors – using comprehensive mapping data to make decisions for the allocation of resources to unserved and underserved areas.

Broadband Map for the Department of Real Estate Services and Office of the Chief Technology Officer (OCTO), Washington DC –

AppGeo developed an interactive broadband services map for the District. The D.C. project also included a survey of 800 respondents revealing differences in broadband usage across the wards and by socio-economic and demographic factors. 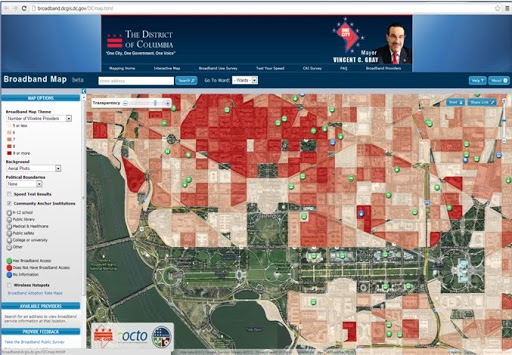 More on this portfolio entry in “Can we build a Better Broadband Mapping Mousetrap?”, an article by Carpe Geo Evangelist Bill Johnson.

AppGeo designed and developed an innovative, building-level Broadband Map that created an information marketplace for high-speed broadband internet access for commercial and industrial businesses. The site allowed companies and real estate developers to find out which providers and what levels of broadband service are available at the building level across the city, thus supporting decisions about relocating office space, or informing real estate investment. The site also enabled broadband providers to enter new information or update their service information. Crowd-sourced requests for levels of internet access are collected through the system provided an indication of demand to providers. 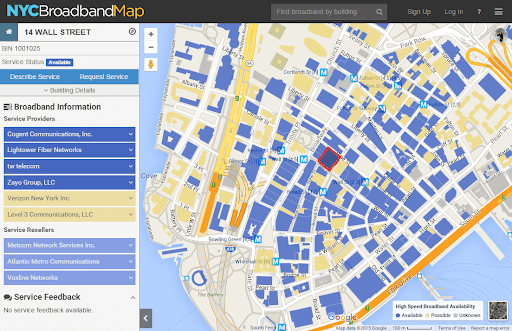 Broadband Map for the State of Washington

Washington’s State Broadband Initiative was launched in 2009-2010. The State Broadband maps and the metadata categories within became the basis of the National Broadband Map by NTIA and the FCC. 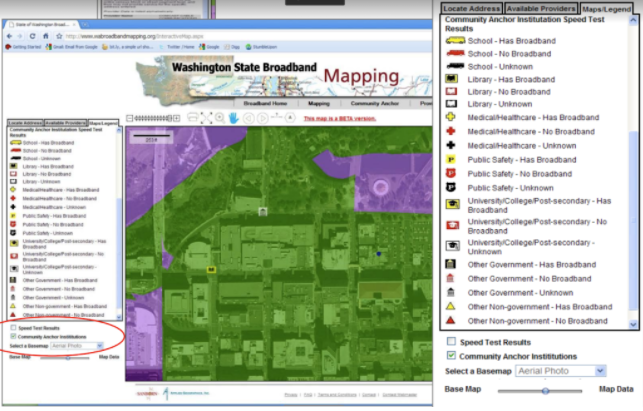 The initiative’s goals were to collect data such as type of service and download speeds, as well as to locate infrastructure from different ISPs. AppGeo compiled this data and developed the methods of creating a central data repository using authoritative GIS data – data validated and finally integrated it into a statewide app.

Broadband Map for the State of Georgia

To kickstart Georgia’s Broadband Deployment Initiative, data for use in Georgia’s GIS mapping tool was collected twice a year for five years. With that data, an interactive mapping tool for every facet of Georgia’s broadband network was created. 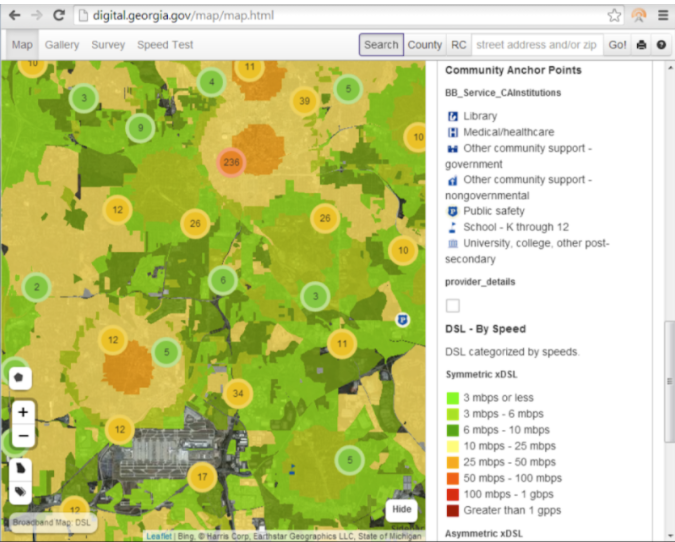 Broadband Map for the State of Vermont 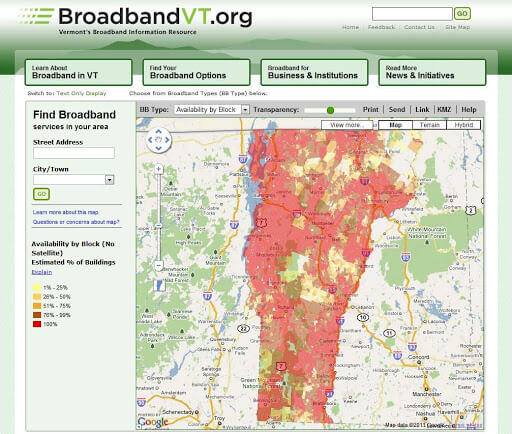 Most importantly, BroadbandVT further refined the State’s understanding of the location served and underserved areas, and then made investments in those areas. SInce the implementation of BroadbandVT, huge connectivity leaps have been made, and now over 97% of vermonters have DSL service, and over 99% have access to wireline service.

AppGeo helped the Massachusetts Broadband Institute create a comprehensive map of the status of the States broadband connectivity. The map was then used to help secure a $45 million dollar stimulus grant to connect 123 towns identified as having areas lacking broadband access. 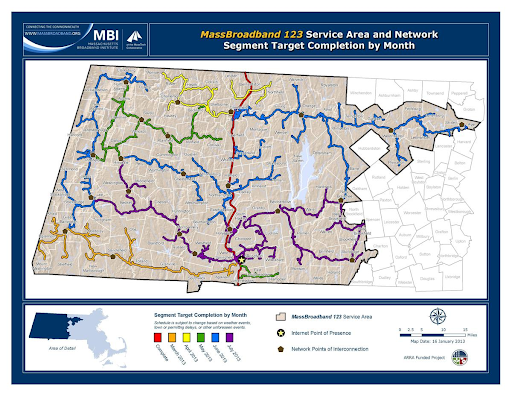 After the grant, 1,200 miles of fiber-optic cable connecting 123 towns was completed.

AppGeo created the broadband map as part of the Connecticut Broadband Mapping Initiative. With data collected from private and public providers such as libraries and schools, AppGeo was able to create a comprehensive map of the state’s broadband connectivity status. 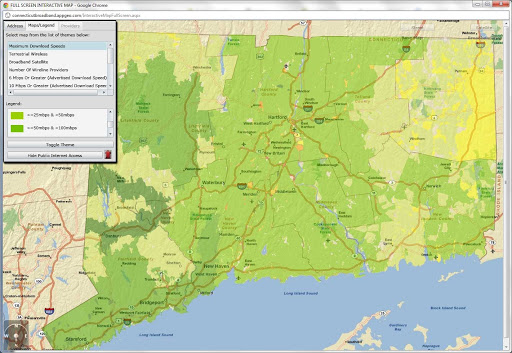 Complementing the interactive maps, static maps have been created that identify areas served, under-served and unserved with broadband and show various demographic characteristics.