If you are a GIS professional in the US, I’d like you to try a simple thought experiment with some of your colleagues. Close your eyes and try to imagine a fully successful National Spatial Data Infrastructure, NSDI. What do you see? What do your colleagues see? If the image of a successful NSDI doesn’t form quickly in your mind; that is, if you have to wrestle with what it means, perhaps engage in a bit of a mental debate, or just plain give up, you are probably not alone. And if you are able to envision it, your vision may be very different from visions of your colleagues. What this thought experiment almost assuredly reveals is that we lack a truly well understood, shared vision of what NSDI means or why we should pursue it. NSDI strikes me as too conceptual, too esoteric to be truly meaningful to most people. Even the name seems obtuse. Speaking for myself, I say NSDI doesn’t inspire, doesn’t invite us, doesn’t create a common bond to achieve something great. And that is an issue, in my view. But please don’t despair, because there is renewed reason to be hopeful.

Efforts to build the NSDI began more than three decades ago, and they have been partially successful. One source of frustration has been the lack of federal law to firmly anchor the structure for interagency coordination and the requirements necessary for an NSDI. These foundational elements are now codified into law thanks to the passage last fall of the Geospatial Data Act of 2018 (hereafter referred to as GDA). Section 755 of the GDA requires the Federal Geographic Data Committee to “…prepare and maintain a strategic plan for the development and implementation of the National Spatial Data Infrastructure…”. In my opinion, that is the single most important requirement set forth in the new law.

I’ve been active in the NSDI from the beginning. In particular, I spent much of my career working to create the state-level SDI for New York, which forms part of the jigsaw puzzle of NSDI. I know from my work in New York that getting broad levels of cooperation from stakeholders scattered across many state agencies, local governments, and other organizations is a very challenging endeavor. Experience has taught me that participation levels will be, at best, low to modest without a strong common cause that everyone can rally around and can see how their small role contributes to the greater good.

Responding to disaster situations is one form of common cause, and also relevant for this discussion, since geospatial data is a critical element in understanding the scope and managing the response to disasters. I was involved in the state’s response to many disasters, but by far the worst disaster was the terrorist attack on the World Trade Center on 9/11/2001. I live near Albany, New York, 150 miles from New York City, and was actually in St. Louis on that fateful Tuesday, so I was not immediately impacted by that horrible event, nor did I lose any close friends or family. Even so, I did have a role in the response and saw, first-hand, how the GIS community rallied to assist in the response.

The State GIS Office where I worked handled the imagery for 9/11. We issued an emergency contract and coordinated the acquisition of orthoimagery, LiDAR, and thermal imagery, flown daily for 6 weeks. I traveled to Manhattan and met with officials at the temporary emergency management headquarters set up on Pier 92. I visited the World Trade Center site during the recovery operation. I knew many of the GIS professionals who came together and formed the Emergency Mapping Unit within the OEM, staffing it voluntarily on shifts, 24×7. Prior to 9/11, they worked in different city agencies that cooperated on a limited basis with each other. There had always been turf issues, competing agendas, and other hurdles that anyone who has pursued multilateral coordination would easily recognize.

But once 9/11 happened, immediately everything was different. Those GIS professionals from across the city were suddenly united by a common cause, a basic human need to help. They cooperated with what they each knew how to do, GIS, and rallied around a clear sense of purpose. Together, they built and supported a robust set of GIS capabilities that was widely used throughout the long and difficult recovery period. The maps they created were everywhere. Barriers that had existed previously between agencies, barriers that had previously blocked access to data, and especially the barriers of bureaucracy that can stymie or stop progress, those all fell away. They came together, they figured things out, they made it work, all by working together for a common cause.

Please forgive me if it sounds like I am recommending a national disaster as a way to rally the national GIS community around NSDI. I would never wish for such a thing. But I do believe that we need a new, widely shared vision for what the NSDI can be. And that brings me to The Wizard of Oz.

When I was growing up, the The Wizard of Oz was a cultural touchstone. It was broadcast annually on TV and my family, like many others, anticipated that event and we all gathered around our single TV to watch it. Unfortunately, the Johnson household did not have a color TV, so I never saw the movie in color before I was an adult, and therefore missed out on the spectacular Technicolor that made it a marvel in 1939. Even before it was a movie, the book by L. Frank Baum was a bestseller when published in 1900. I reference The Wizard of Oz not out of nostalgia, but because the imagery is widely recognized and is well suited for explaining the core elements of strategic planning and how I think it should be applied to the NSDI. 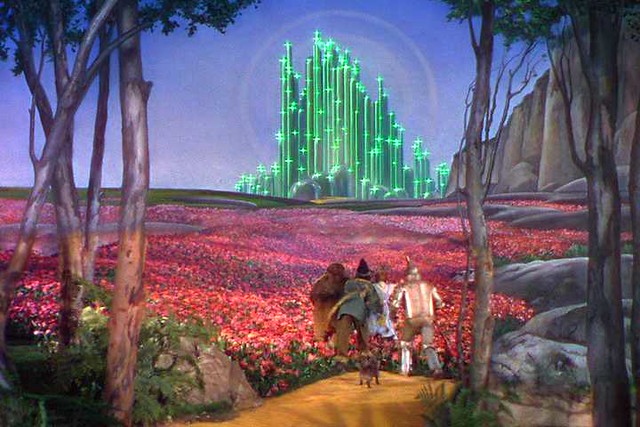 Let’s explore this image. Dorothy, the Scarecrow, Tin Man, and Lion are on their way to the Emerald City. It’s a clear goal, glimmering and exciting, with the promise of solving their problems when they get there. The Emerald City is the destination that they each recognize as being worth the effort to get there. It’s the incarnation of their common cause or uniting purpose. It’s on the horizon, which means it is not so far off that it can’t be seen, yet it will take a journey to reach it. They can expect obstacles and adversity along the way, but if they stay together and work as one, they believe they can reach it.

The Yellow Brick Road is the path between where they are and the Emerald City. It guides them on their way and directs their energy towards reaching their goal. The Yellow Brick Road embodies all of the elements that keep them together and walking in the right direction. It smooths the way and makes the walking easier, guiding each footstep. It assures them that when they are following it, they are not lost or wandering aimlessly. Their progress can be measured, as each step brings them closer to their destination.

And finally, we see the travelers in the foreground. Each of them is different, each comes from different circumstances, each has a different need for reaching the Emerald City. Without a common purpose or pathway to get there, each would go their own way, most likely heading towards separate destinations, or perhaps to nowhere in particular. But there is a leader, Dorothy, who convinces the others to join her on the journey. She has shared the vision of the Emerald City with them, explained that the solution to their problems can be found there, and created a sense of hope that has led each of them to abandon their solo pursuit and join the common cause. She is empowered by a pair of Ruby Slippers that give her the charge to proceed and the confidence to lead the trip through the unknowns ahead. Arms linked, Dorothy and her companions follow the Yellow Brick Road together, on their journey to the Emerald City.

Are you seeing the elements of strategic planning in this analogy? I believe that a process akin to this is the most critical success factor in achieving the NSDI. It is the vehicle to unite the GIS community and create the common cause so essential for the scale of coordination necessary for success.

We have an opportunity, right now, to take advantage of the new foundation created by the GDA. We can seize this opportunity and boldly move forward to collectively define our NSDI Emerald City and the path to reach it. I have seen what can happen when GIS professionals find a common cause, as happened after 9/11. Let’s find that common cause now for NSDI. What we need is something like President Kennedy’s 1962 challenge to put an American on the moon before the end of the 1960’s. He didn’t talk about building rocket engines, or lunar landers, or computer guidance systems, or countless other technical details necessary for success, but rather a bold challenge in terms everyone could understand.

We need a way to convey the importance of a shared, public map of the US to everyone. I’ve always liked the name that North Carolina gave to their collection of state SDI, NC OneMap. It is simple, memorable, and creates an image in my mind of a single map that meets all the needs of North Carolina. A name like that for NSDI would be a good start, but it needs to come out of a process of engagement, so that it represents a shared vision of what can be.

The MGM studio in Hollywood went all out to create The Wizard of Oz in 1939, using 9,200 actors, 30 sound stages, 65 sets, and a staggering Depression-era budget of $3 million. It was a bold commitment to create something truly grand. Let’s be similarly bold now with NSDI. Passage of the GDA created an opportunity. The FGDC may not see themselves as Dorothy, but I believe they should. Section 755 gives them a sparkly new pair of Ruby Slippers by charging them with responsibility for NSDI strategic planning. Let’s encourage them to put them on and engage all of us to join together on the Yellow Brick Road, heading towards a new NSDI city, the Emerald City.