Sunday, February 8th marked the 10th anniversary of the launch of Google Maps and I still clearly remember when my friend, and former colleague at AppGeo, Rich Sutton, called me over and said “hey, check this out.” Even at first glance it was pretty clear this new site would be a game changer. And in hindsight, I’d put this date somewhere in my personal “top 3” of the most important developments in the geospatial industry. The other two would be the 1982 release of Esri’s ARC/INFO (or, if you prefer, their earlier release of PIOS), and the release of the initial 1990 TIGER data by US Census which democratized the availability of geo data.

In thinking about writing this piece, I’ve enjoyed going into my email archives (I’m a well known email packrat) from February-March, 2005 to see what was being said, and indeed this event had created buzz. Among the finds: 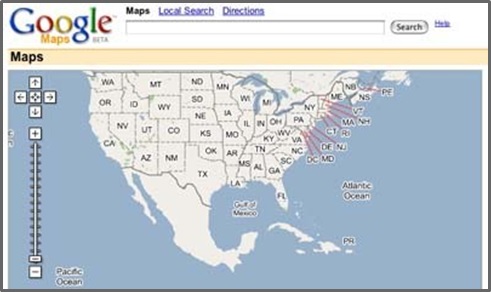 Google Maps UI circa 2005 from googlesystems.blogspot.com

So why is this birthday so important and worth celebrating?

Google as a company is not perfect, and indeed there’s been plenty of geo press coverage and blogging on some recent upheavals and changes in Google’s geo product lines. But from our point of view as a Google geospatial partner, speculation that Google might be “getting out of the mapping game” is strongly and strangely misplaced. In truth, Google is doubling down on what it does best which is Google Maps; and it’s retreating from its more technical and “GISsy” offerings. Google’s Maps API products remain available, growing and evolving. These tools give business and government an ability to leverage Google’s content – base maps; imagery; geocoding; street view; live traffic; routing – and a user interface that most people are already familiar with. That’s what Google does best, and the field is open for other solutions that enable people to manage and manipulate their own geo data, whether on the cloud, or on-premise. Long live the mashup!

The bottom line is that Google Maps has changed the professional geospatial industry, and I’d argue strongly for the better. And, February 8, 2015 is a day worth both reflection and celebration. Happy birthday Google Maps!