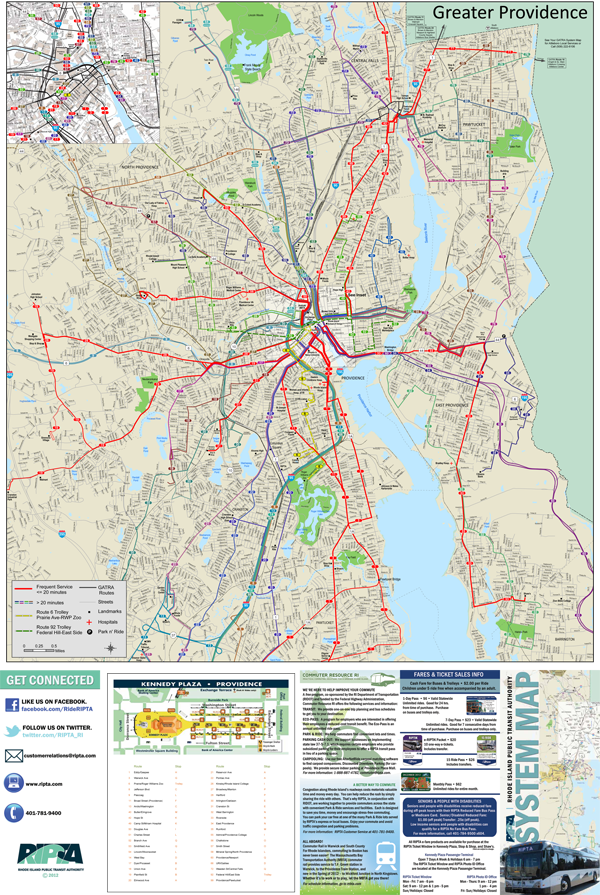 Although most maps are now designed to be distributed via internet devices and viewed interactively, there is still a need for hardcopy maps and the art of (hardcopy) cartography has not completely disappeared.  The larger size and crispness of a printed transit map, for example, can be particularly useful when large geographic areas are being viewed, such as when a person is planning a trip that may transit several communities, or when they want to see many routes all at once in context.

When designing for hard copy printing, however, different sorts of design decisions need to be made in contrast to designing for interactive web display.

By way of example, AppGeo has produced several editions of the Rhode Island Public Transit Authority (RIPTA) statewide map of their bus and trolley services. For the 2012 edition, RIPTA requested a complete redesign including better highlighting of the Providence metro area.  This Rhode Island transit map needed to show both the entire sweep of RIPTA services in Rhode Island as well as very detailed routing for downtown Providence.

To solve this cartographic problem on the printed page, we developed a map covering all of Rhode Island on the front side of the publication, and two detailed insets of Providence area on the reverse.  To aid the riders in their trip planning we used color and line weight to highlight the highest frequency routes.   The printed map also presents a table showing detailed time-of-day and bus frequency, plus a map of the layout of the Kennedy Plaza terminal in Providence.

Another of the challenges of designing for hardcopy is what I like to call “map origami” or how the map gets folded for ease of use.  At the outset we created a folding pattern to match the desired folded dimensions.  Then we aligned the map components logically within the grid formed by the fold lines.  It is a back and forth process of adjustments to maximize the utility of the map.

The RIPTA map was printed on offset press in an edition of 20,000 for distribution to their ridership.  We also regularly produce small editions of maps and atlases on our in-house large-format inkjet plotter.  An example of this would be a parcel atlas for use in the Assessor’s office of a municipality.

And I am pleased to note that the 2012 RIPTA map was awarded an “Honorable Mention” for a Transportation Publication at the annual American Association of State Highway and Transportation Officials (AASHTO) GIS for Transportation (GIS-T) Symposium in Colorado.