Can We Build a Better Broadband Mapping Mousetrap?

Two recent events have focused new attention on national-scale broadband mapping.  On September 24, The Verge published an article titled “How bad maps are ruining American broadband”.  The article has drawn renewed attention to some issues that frustrate users of the National Broadband Map, which the FCC relaunched in an updated design in February of this year (replacing the original National Broadband Map that had not been updated since 2014).

A brief personal background is in order before I comment on these maps.  The views expressed here are my own and reflect my experience in broadband mapping beginning in 2009 when I was Director of GIS programs for New York State. Our in-house team participated in the State Broadband Initiative (SBI) funded by the NTIA, where states were awarded grants to gather broadband data from the telcos (telecommunications companies), convert the information to map data, and submit it to NTIA where it became the basis for the National Broadband Map.  I retired from the state in 2016 and became GIS Director at USAC in Washington, DC where I had a principal role in developing the CAF Map. I left USAC in March of 2018, while the CAF Map was still in development, and joined AppGeo, a consulting firm that addresses the complex geospatial IT strategic and technical needs of federal, state, and municipal governments. Bottom line: I have more than a casual relationship with the opinions expressed here, along with a belief that a better way is within reach.

We should start by recognizing that when the National Broadband Map first launched in 2010, it was a remarkable achievement and provided the first and only comprehensive map of broadband availability in the US.  Its design was a compromise that balanced public disclosure with agreement from the telecommunications carriers concerning the level of detail they were willing to contribute voluntarily.

In the new incarnation of the National Broadband map, FCC has shifted to using Form 477 as the data source, following a proceeding to revise that form and make the data public.  Form 477 is the only comprehensive, nationwide, publicly-available dataset on broadband deployment in the US. We have only this single source of the truth and it is based on self-reporting by the broadband carrier companies.  Sure, we can slice and dice it in a variety of ways, but it remains a single, largely unverified data source.

An unfortunate characteristic of the National Broadband Map is that it is least accurate in precisely those areas where it is most important for informing public policy on broadband. Namely, at the edges of available broadband services in rural areas where costs to deploy broadband to widely dispersed residents exceed likely revenues, unless a subsidy is provided.  Exactly where and how to provide those subsidies is at the core of public policy on broadband. The National Broadband Map contains the best available information (and for all practical purposes, the only available information) to delineate these unserved and underserved areas. The issues with the map in these rural areas are a combination of overstated service, low resolution, and poorly matched geographic units.  Each is significant on its own, but in combination the result is high uncertainty as to where the edges of broadband service really are.

In the Form 477 dataset, a carrier indicates that they offer a given level of broadband service (for example, cable-modem broadband at 25 mbps download and 5 mbps upload speeds), but the entire geographic reporting unit is coded with that service even if only a single address at the edge can receive that service.  This results in a significant overstatement bias in the dataset that is at its worst at the outer edges of a given carrier’s network. This would be a relatively minor issue if the reporting units were more granular (smaller), but the Form 477 uses Census Blocks from the US Census Bureau as the units.

The Census geographies (Blocks, which aggregate to Block Groups, then Tracts, Counties, and States) were designed for tracking the US population and they were drawn so as to have nominally consistent populations, which means that Blocks naturally become larger and larger in area as we transition from urban to rural areas and can be quite large (many square miles) at the edges of broadband availability.  These large reporting areas for Form 477 have the effect of masking where the true edges of service really are, and in the process, inflating the counts of households with broadband availability. The primary rationale for using Census Blocks is that population and household counts are associated with them.

The other issue with Census Blocks as reporting units is that they bear little resemblance to how broadband networks are actually deployed.  Census Blocks use road centerlines as one of the most common geographic features to define the Block boundaries. But wireline broadband infrastructure (fiber, cable-modem, DSL) is generally strung on the utility poles located in the right-of-way along roads.  This means that for roads which are Block boundaries, the homes on one side of the road are in one reporting unit, while the homes on the other side are in a different unit, even though they are served by the same wire on the poles along that road (i.e. the same broadband network segment).  The fit of Census Blocks to mobile broadband availability is also lacking, as mobile broadband coverage is largely independent of the road network and other geographic features that comprise Block boundaries.

The most remarkable thing about the new CAF Map is that it shows us what is possible.  This map shows the broadband deployment data as individual points (discrete street address locations), so there is no mystery about where subsidized broadband service exists or does not exist.  There is no overstatement of service derived from household counts in Census Blocks. In fact, on the CAF Map the Census Blocks are only relevant from the standpoint of depicting the areas eligible for the subsidies.  The point locations of broadband service are provided directly by the carriers as part of their reporting requirements under the rules for receiving the subsidy funds. And the CAF Map includes a data table dynamically linked to the map so you have the details at all times, ready to download. 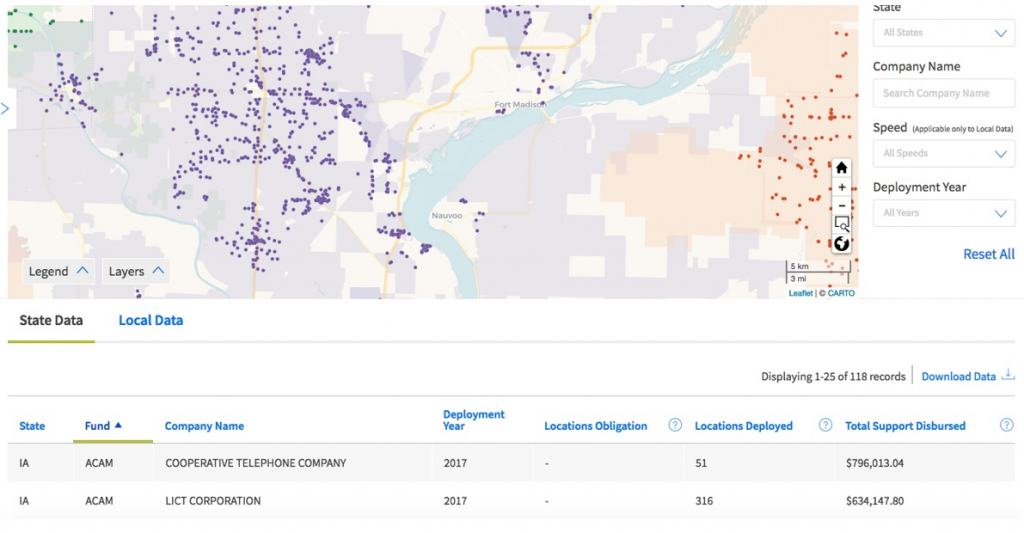 What if we had a dramatically simplified reporting requirement for the carriers, where they only needed to draw outlines around the areas where a given speed of broadband service is available?  Under this plan they would not need to geocode any service addresses and the same reporting method would work equally well for both wireline and mobile broadband. There would be no need to tabulate data by Census Blocks. These broadband service polygons would then be overlaid on public address point data to obtain accurate counts and geographic representation of locations (households) served.  Any address points outside of these polygons would give us an accurate count and representation of unserved locations. Crowd-sourcing with online speed testing tools could be used as a source of independent data validation, along with commercial data sources of broadband performance. Both would bolster confidence in the map.

This proposed method of reporting existing broadband would perfectly supplement the data being provided by carriers participating in the Universal Service Fund subsidies and would therefore provide policy-makers and the public with a rich and accurate depiction of what’s actually going on with broadband service across the country.  Wouldn’t that be great?

There’s a catch, right?  Well, yes, sort of — we do not yet have a complete, nationwide, publicly-available dataset of address points.  We have a start, called the National Address Database, and lots of work is going on to create accurate address point data for Next Generation 9-1-1 systems, but significant work remains to be done.  That said, there is more than enough data available right now in the National Address Database to immediately conduct a Proof of Value (POV) project to demonstrate this proposed model of broadband mapping over a significant area, perhaps an area spanning contiguous states.

A POV would provide the baseline information on level of effort compared to the current data collection and mapping with Form 477, and would likely demonstrate a substantially lower reporting burden for the carriers, coupled with a superior mapping outcome to support much more accurate targeting of broadband subsidies to close the broadband gap across the US at the least cost.  Assuming success with a POV, there would be a significant use case that could be leveraged to increase the participation of states in providing the data to the National Address Database. In the short term, one possibility would be to use commercially-sourced address data as gap-fill in the National Address Database until the NG9-1-1 and state participation roles are fully implemented.

It can be done.  It would result in a superior National Broadband Map.  It would populate the National Address Database that would support a host of other valuable public purposes.  It would most likely cost less than the current data collection and mapping effort.

Why should we care?

According to the 2018 FCC Broadband Deployment Report, an estimated 24 million Americans do not have fixed (wireline) broadband available at the minimum acceptable speed of 25/3 mbps. In fact, today we are unable to provide a truly accurate count of how many households lack broadband service. We’re already spending more than $4 billion per year in the Universal Services Fund High Cost programs alone to fund broadband expansion.  There are many other funding streams targeted to broadband and every one of them needs a clear picture of exactly where the needs are. We need to ensure that every dollar is spent where it is most needed.

We can do better. And we can start by providing the best possible factual footprint to our policy makers, with full transparency to the public. And that means we need an improved National Broadband Map.